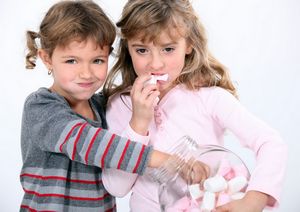 What do ADHD, Marshmallows, ODD and CU have in common? Recent research of 198 preschool children attempted to determine correlations between these disorders and symptoms.

Reward-related dysfunctions are the inability to regulate one’s inhibitory control. Inhibitory control allows for the regulation of thought and action, e.g. not running out in the street after a ball that has rolled into oncoming traffic.

This research used similar strategies to the marshmallow test where a child is placed in a room by itself with a marshmallow on a plate in front of it. The researcher leaves the child with the marshmallow saying, “You can eat the marshmallow now, but if you wait until I get back, I’ll give you another one so you’ll have two marshmallows.”

This tests the child’s ability to regulate inhibitory control – the opposite of instant gratification. In prior research, children who had low inhibitory control and were more motivated by instant gratification (ate the marshmallow immediately) were less successful in life, had lower income, had lower grades on their SAT and at university, and often had higher rates of ADHD.

According to the article in Psychiatric Times, “The results indicated a unique association between low RRIC [risk related inhibitory control] and ADHD.”  This confirmed previous research mentioned in the marshmallow test.

If you would like to assess your or your child’s inhibitory control, please contact us at 800-788-6786, to discuss taking the BRIEF and FOCUS assessments with us.  Both of these assessments look at one’s ability to control impulsive behaviors along with several other areas of executive function.

Not only will your customized Play Attention program include exercises to improve inhibitory control, but we also provide a full rewards program that is based on specific goals set for you by our artificial intelligence.  Our rewards program is designed to help you achieve higher levels of achievement and teach how to delay gratification.