I could not be happier with the results…Dheepak’s hyperactivity has gone down tremendously! 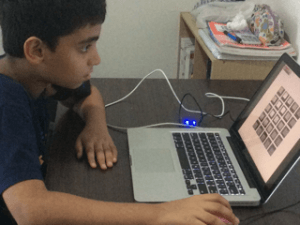 My son Dheepak only started to read and write at the age of 6.5. All the doctors I took him to told us that he had developmental delay. However, after visiting an education psychologist who did a QEEG (mind mapping ) of his brain,  I discovered that he had ADHD.

Finally, I decided to purchase a neurofeedback machine from the UK, and the dealer promised to provide me with training on how to operate the machine. Unfortunately, it turned out to be a nightmare as the machine was too complex to be operated by a lay person.

Then after much research, I found out about Play Attention and decided to purchase it.  I have currently been using Play Attention for the past one year and I could not be happier with the results. To start with, Dheepak’s hyperactivity has gone down tremendously! Previously, he was unable to sit down and watch TV for even five minutes. Now he is able to sit down and watch his favorite cartoons for at least half an hour.

Apart from that, his speech has progressed. A year ago he was struggling to construct simple sentences but now he is able to speak reasonably well and can even ask us lots of questions. His piano teacher has even commented that he is more focused now than before. He is able to sit quietly throughout the lesson and follow the teacher’s instructions, compared to before when he would run out of the class crying and sometimes be disruptive, pinching and kicking his teacher.

His memory has also shown tremendous improvement as he is able to memorize timetables and recite them. He is also able to do simple arithmetic on his own without any guidance.  Before Play Attention I would have to sit next to him to guide him and get it done. Now, when taken to the gym, he is able to run on the treadmill for a good 20 minutes which he was previously unable to do for even 5 minutes.

As mentioned above, Play Attention has brought about much improvement to my son Dheepak and we are looking forward to seeing more improvements as he continues using it. Play Attention is far more cost effective, convenient and easy to use compared to other treatments out there. Thank you Play Attention.