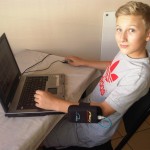 Luca has always appeared to be a “bright child” but struggled to channel his intellectual capacity into everyday school tasks. This is true of many children with attention problems. They are bright but their grades don’t reflect their true potential. He found it difficult to ‘focus’ in the classroom but tried hard. So why was he struggling?

Luca is a bright student, but he became bored very quickly in environments that presented him with low stimuli. He loves subjects such as maths and science, but could not maintain his focus and would lose attention in the mundane classroom environment.

The change has been dramatic in the months following Luca’s introduction to Play Attention in June 2013. Luca has not only earned better grades at school, but has demonstrated a notable improvement in his sporting ability according to his dad. Luca is now able to focus in a variety of situations – no matter how mundane or ‘boring’ they may be.

The team at Psych Matters [South African Center] is incredibly proud of Luca’s continued effort and dedication to the Play Attention programme, and salutes him for his progress thus far!

Shakeel started with the Play Attention Programme in March 2013. Even at seven years old, Shakeel is a bit of a perfectionist, and not getting the results he wanted was frustrating for him. He didn’t know how to “zone in” on the task at hand given to him, and ignore all outside interferences in the classroom environment. He was easily distracted.

After a few months of attending the Play Attention programme, the change in Shakeel’s concentration was noticeable. Shakeel has learned to control various behaviours that were not conducive to his focus, such as foot tapping, fidgeting and letting outside factors capture his attention. Shakeel works incredibly hard in every session and as a Play Attention Practitioner, I am extremely proud of him. We have worked on breathing techniques when his focus starts to dwindle, but the most noteworthy observation is that Shakeel very seldomly has to be prompted to “take a deep breath and relax” or “blink”; he recognises when he starts losing focus and implements behaviours to get back on track. This self-regulation is a big improvement.

At such a young age, I am taken aback by the amount of effort Shakeel puts into his sessions, as well as the responsibility he takes for his work. Working with him has been an absolute joy!